On a recent trip to my favorite cash & carry in the South Asian neighborhood, inspired purely by the photo on the shelf, I picked up a new (to me) vegetable to experiment with. It looked like some kind of great-grandfather root with rhinoscerosy skin, halfway between sweet potato and celeriac. A Google search later on informed me that it’s a purple yam, and that its Latin name is Dioscorea alata. It’s native to Southeast Asia but now also grows in other parts of the world including South America, Australia, China, Africa and the southeast US. Its Tamil name, used on the label in this Sri Lankan shop, is rasa valli kilangu, while in Yoruba, a language of southwestern Nigeria, it’s called isu ewura and in the Philippines it’s ube. The purple yam has apparently gained some fame among Western foodies under this name.

In folk medicine, Dioscorea alata is thought to be effective at treating ailments such as fever, leprosy and hemorrhoids. Some even believe that consuming it increases the likelihood of bearing twins! 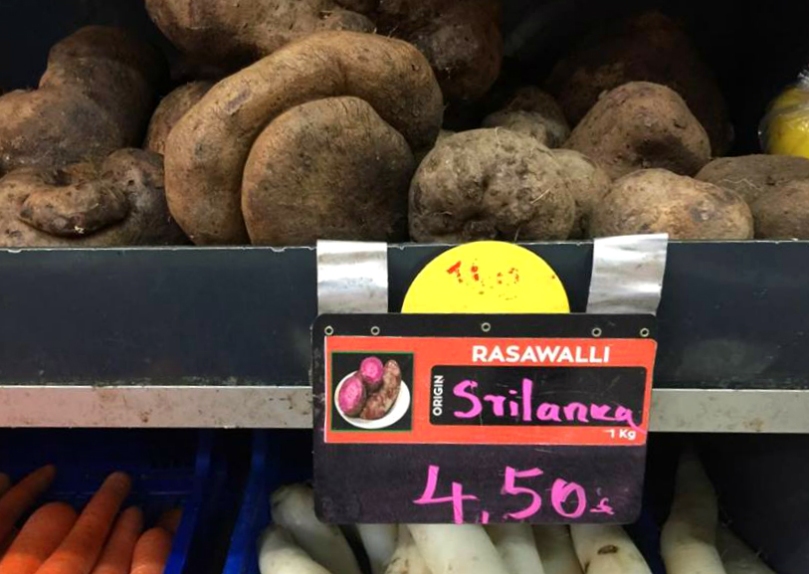 In Sri Lanka, the purple yam is often cooked and mashed to make a sweet dish. As it contains a lot of starch, it can also be formed in a mold rather like polenta, and then cut it into slices or other shapes.

For my first experiment with this tuber, I decided to try the basic mashed form. As it doesn’t have much flavor on its own, this yam benefits from a bit of vanilla and/or cardamom (the latter being a traditional ingredient in the Sri Lankan dish). The end result is a slightly sweet mash that seems ideal for breakfast, so I am calling it a porridge. Warm and filling, it could become your new favorite comfort food.

Incidentally, I was disappointed at first that my rasa valli, once peeled, turned out not to be the bright magenta promised by the label photo, but rather a light lavender color. Maybe some are just more purple than others. But lavender is nice too—one of my favorite colors actually. So it’s okay. It’s still sort of (vaguely) in the red-violet range, and therefore acceptable enough for the first recipe to appear on this blog. 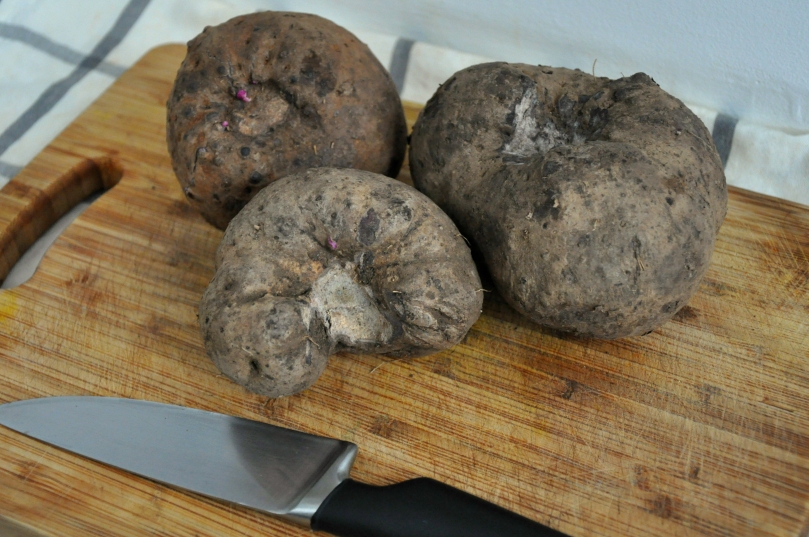 Serves 2 (as a fairly filling breakfast)

Begin by peeling the yam. Caution: these yams are quite slippery characters once peeled, and will want to suddenly fly out of your grasp and across the kitchen! 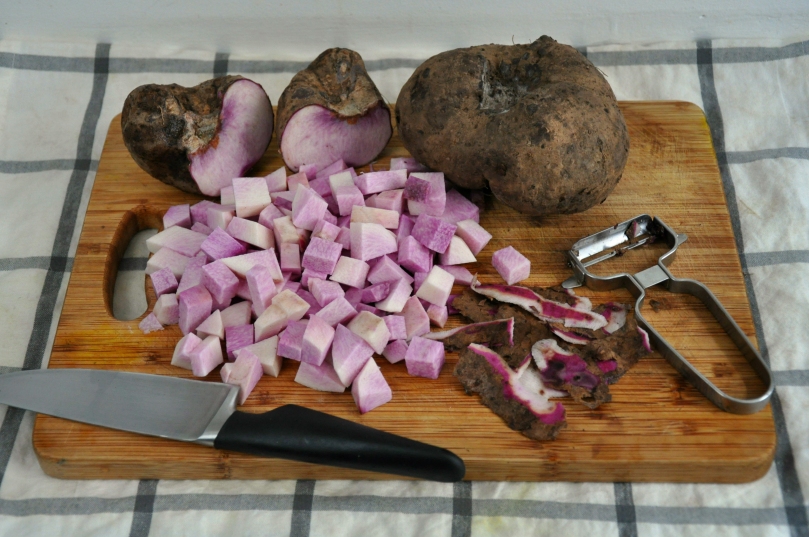 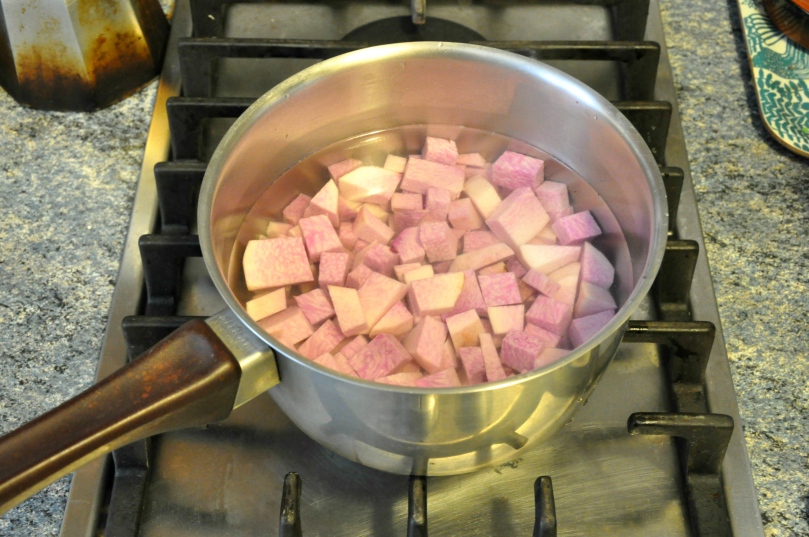 Next, place the cubed yam in a medium-sized saucepan and fill it with enough water to cover it. Bring to a boil, then lower the heat to maintain a gentle simmer. After about 20-25 minutes, test the yam for doneness with a fork. When the cubes seem mashable, turn off the heat and drain most of the water from the pan. With a hand-held potato masher (or large fork), mash the cubes until you have something that resembles mashed potatoes. Alternatively, you could process them with an immersion blender or in a food processor, but they will be so soft that this isn’t really necessary, and the partially chunky texture is kind of nice. 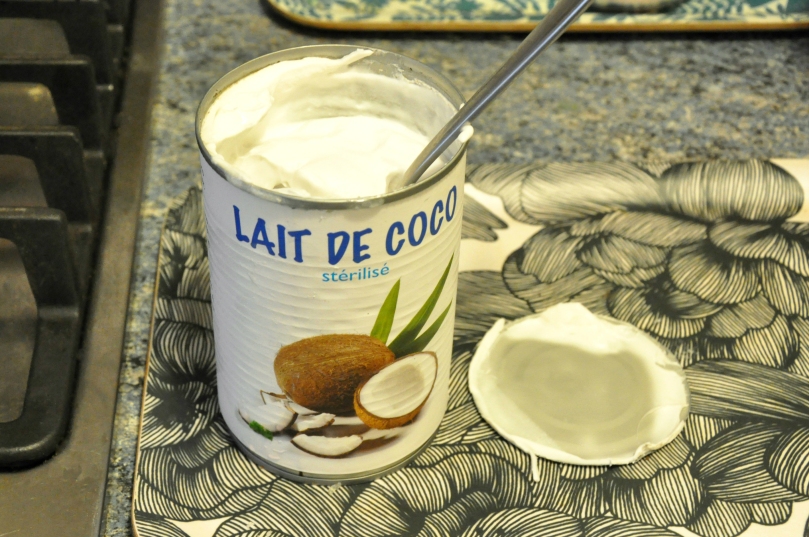 Open up a can of regular (not reduced-fat) coconut milk. Remove a couple tablespoons of the thick cream from the top, transfer to a small bowl, mix with a bit of maple syrup and set aside. This will be the topping.

Stir the rest of the coconut milk in the can so that the watery part at the bottom combines with the thicker part toward the top. Add about 1/2 cup (118 ml) of the mixed coconut milk to the saucepan and turn on the heat again to medium-low. Use a bit more if you want the porridge to be more liquidy. 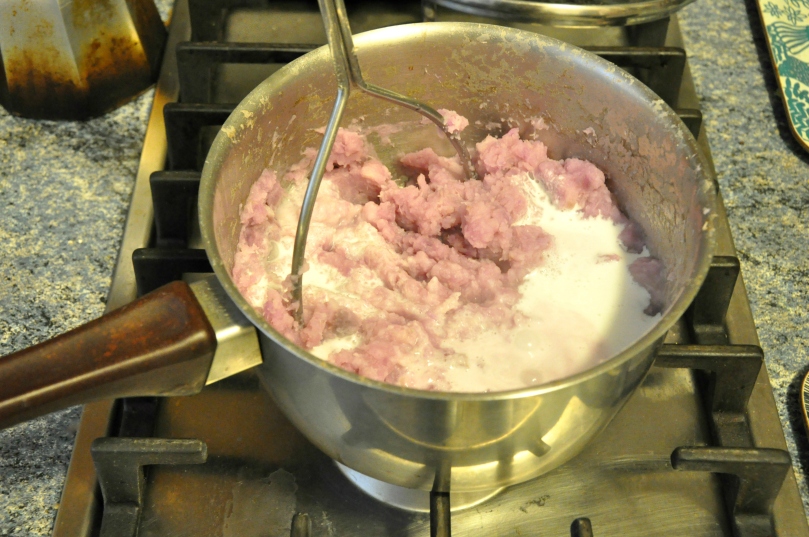 Continue mashing the yam together with the coconut milk until you achieve a uniform consistency. Now add the maple syrup, vanilla, salt and optional cardamom and combine well. Taste and add more maple syrup and cardamom if you prefer it sweeter or with a stronger cardamom flavor. Alternatively, you can drizzle extra maple syrup on top of the porridge once it has been transferred to the bowls.

Transfer the porridge to two medium-sized bowls (or one larger bowl to share, for romantic types!) and top with the reserved sweetened coconut cream, which will melt a bit. Garnish with added ground cardamom, ground açaí (shown here), dried coconut or edible lavender flowers. Enjoy!