Last weekend, I had a visit from a longtime Tunisian friend who is very dear to me, and who was passing through Paris on his way to the US. There was just enough time for a short visit. In between updating me on his family’s doings and his plans for the upcoming months, he fished some interesting things out of his bag and placed them before me.

One was a mtabga, a sort of sandwich his sister had made that same day—harissa and chopped yazoul (a delicate wild garlic) in a folded-over homemade semolina flatbread. We shared this, and it was divine, although harissa always involves some sweating and nose-blowing for me (of all North African cuisines, Tunisia’s is said to be the spiciest). Next, he produced a box of scrumptious chickpea cookies from a local bakery, which you may already have seen if you follow my Instagram. And finally, he plunked a clear plastic bag containing an unfamiliar gray flour on the table. “It’s drah,” he explained, in response to my perplexed look. This did not help me much. But we did a quick search and found that its English name is sorghum!

I don’t know about you, but sorghum is not a grain I could have identified in a line-up. I had heard of it, of course, but could not have guessed at how it is used. Turns out it is native to Africa, although the US is now its largest producer, and it’s used as both human food (in part to make sorghum molasses) and as animal fodder. It is the world’s fifth-leading grain crop. As it doesn’t have an inedible hull, it is usually consumed as a whole grain with all its nutrient-rich outer layers. It also happens to be gluten-free and is apparently a common ingredient in gluten-free baking mixes. And after making this dish, I can understand why—the flour gelled easily into a thick flan consistency without any binder.

And now a brief aside for the linguistics enthusiasts among you. The Tunisian name, درع, is sometimes transliterated dro3 with a number 3 at the end to represent the ayn, a pharyngeal consonant that is notoriously difficult for non-native Arabic speakers to pronounce—having studied the language for two years, I can confirm this! The ayn creates a sound almost like an extra syllable (although it is actually not) and, to my ears, the word comes across as something like drah-ah. Elsewhere in the Arabic-speaking world, sorghum is called سورغم, which sounds very similar to the English word. An etymology search revealed that our English word comes to us from Modern Latin via the Italian sorgo, “a tall cereal grass”.

I now bring you a recipe for an easy Tunisian sorghum dish that my friend’s mother makes. Called simply drah after its main ingredient, it’s most commonly eaten as an energy food for breakfast and so can be considered a sort of porridge. But since the consistency is similar to that of flan, I think it would also make a very nice light dessert.

I made mine with rice milk so it would have some extra natural sweetness, but in Tunisia some make it with water only. Flavorings can also vary, but I chose orange-blossom water for its subtle floral notes (ginger is another popular ingredient). In Tunisia, this dish is most often eaten topped with some crumbled halwa chamia, a dense sesame-based confectionery, but almonds and honey are another common way to enjoy it. For a fully plant-based dish, I used Bee Free vegan apple honey, and I imagine that maple syrup, agave syrup or molasses would also work well. Because the honey is so sweet, I did not put any sugar in the pudding itself, but you could add 1 or 2 teaspoons of sugar to the mixture as it cooks if you prefer a sweeter taste or don’t want to use a syrup on top.

Sorghum pudding can be eaten either shortly after it’s made (allowing some time for it to cool, as it immediately forms a skin underneath which the temperature remains molten for a time) or room temperature/chilled. Wait until just before serving before adding the almonds and syrup to ensure that the almonds remain crisp.

Makes two servings of one cup each 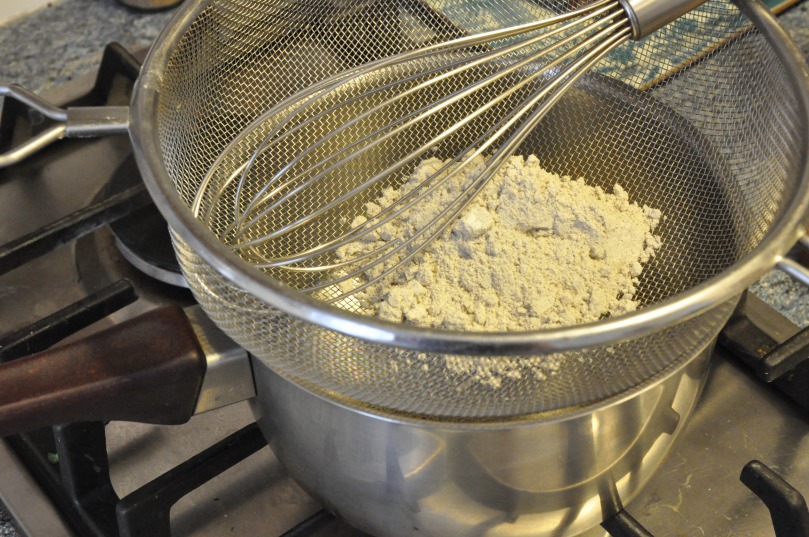 Begin by sifting the sorghum flour through a strainer into a medium saucepan to break up any lumps. The burner should not be turned on yet. 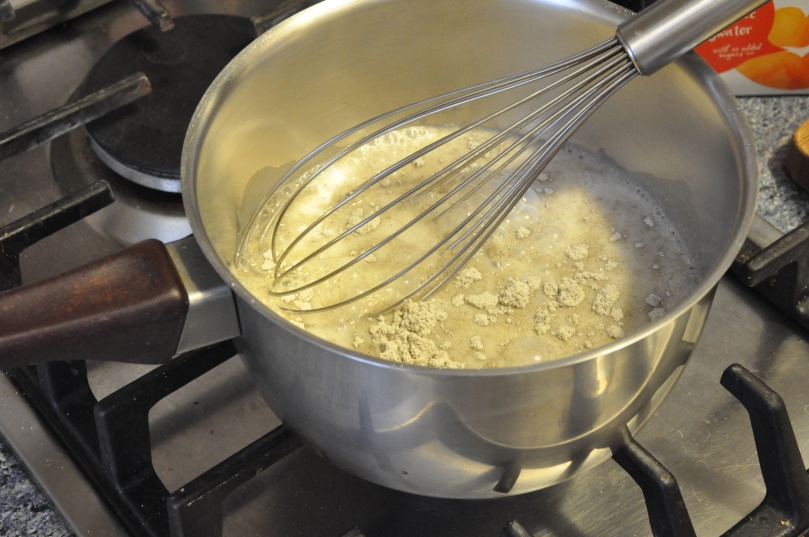 Add the (cold or room-temperature) rice milk, water and pinch of salt and whisk to thoroughly combine BEFORE turning on the heat. Note that once the liquid heats, any additional sorghum flour added will turn into lumps and it will be next to impossible to break them up.

Turn on the heat to medium and heat to simmering, stirring constantly or at least very frequently. When the mixture begins to boil, add the orange-blossom water and continue stirring until it thickens. You will want to stand right there and watch it until it’s ready, whisking to prevent the formation of lumps. It takes about five or six minutes for it to reach the desired thickness and could boil over quickly, so stay put! Make sure you have your serving bowls nearby. 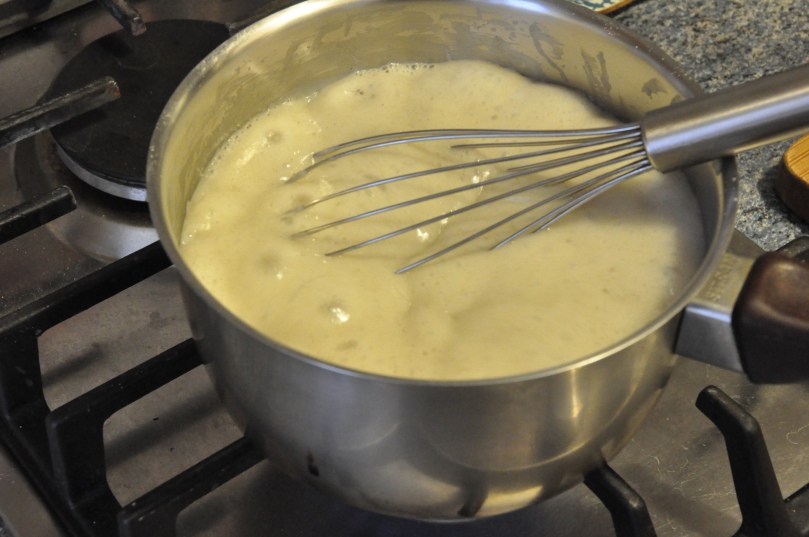 When it’s ready, it will look pretty much like this and be making dramatic glopping sounds as the mixture boils. When it has the consistency of a thick potato soup, it’s done. Pour it into the serving bowls right away because it begins to form a skin as soon as it’s taken off the heat.

After the pudding has been poured into the serving bowls, and while it cools a bit, toast your flaked or slivered almonds. Place a dry non-stick frying pan over medium-low heat and stir or toss occasionally until lightly browned. You will want to stick around for this step too as lightly-browned can become far-too-browned or even burnt in very short order. Have a small ceramic bowl ready to transfer them to when done.

When they look like this, they’re ready. Transfer them quickly to the bowl or (as I have done) a cutting board or other heat-resistant surface. If you leave them in the hot pan while searching for a bowl, you run the risk of the almonds browning even further. 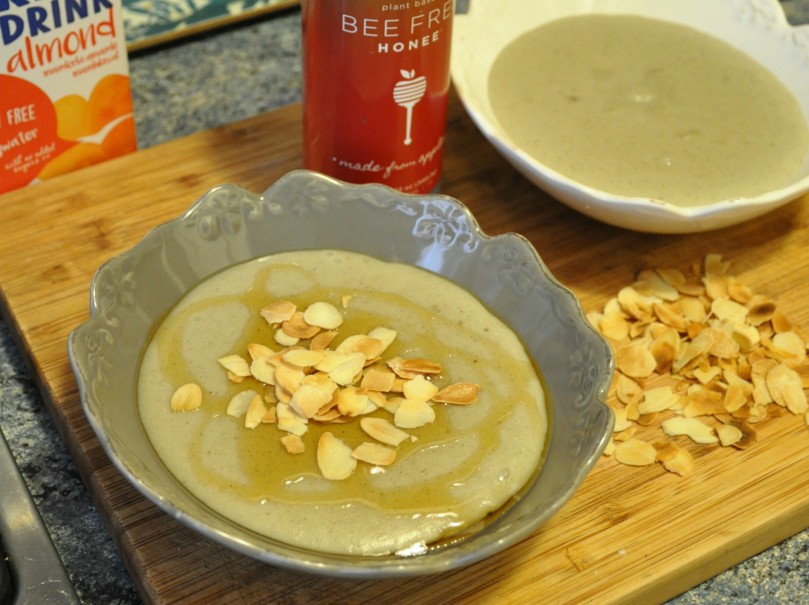 If the pudding’s surface seems firm (by now it should have cooled enough, but check the top to be sure), drizzle your honey or syrup on it and finish with the almonds.

And there you have it! Once the honey or syrup and almonds have been added, it should not sit around too long as the almonds will gradually get soggy and the syrup watery (becoming like a flan with caramel sauce, which is not bad but not the intended presentation either). You can see this effect a bit in the photo below because I got distracted by something between the preceding photo and this one. 😉 But the taste is still good, however it looks. Enjoy! 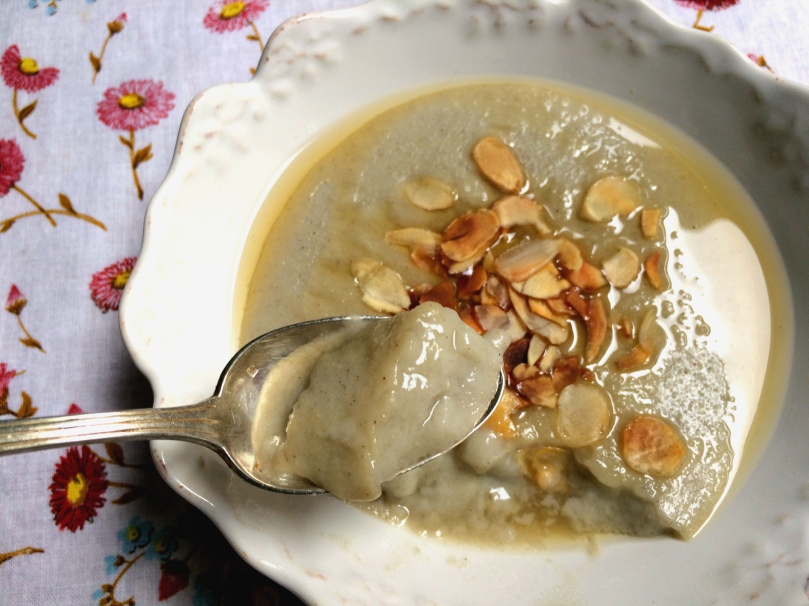 Variations: top with halwa chamia or any type of chopped nut (pistachios would be great) or even dried fruit such as golden raisins. Sprinkle some gomasio in with the nuts for a salty contrast to the sweet topping.