In the United States in 1971, Nixon was president, the Vietnam war was going on, the 26th Amendment lowered the voting age from 21 to 18, National Public Radio broadcast for the first time, Amtrak was founded, Texas Instruments released the first pocket calculator, soft contact lenses became available, cigarette advertising on television was finally banned and the Walt Disney Resort opened in Orlando, Florida. And, in somewhat less sensational news, the Betty Crocker Recipe Card Library was created. 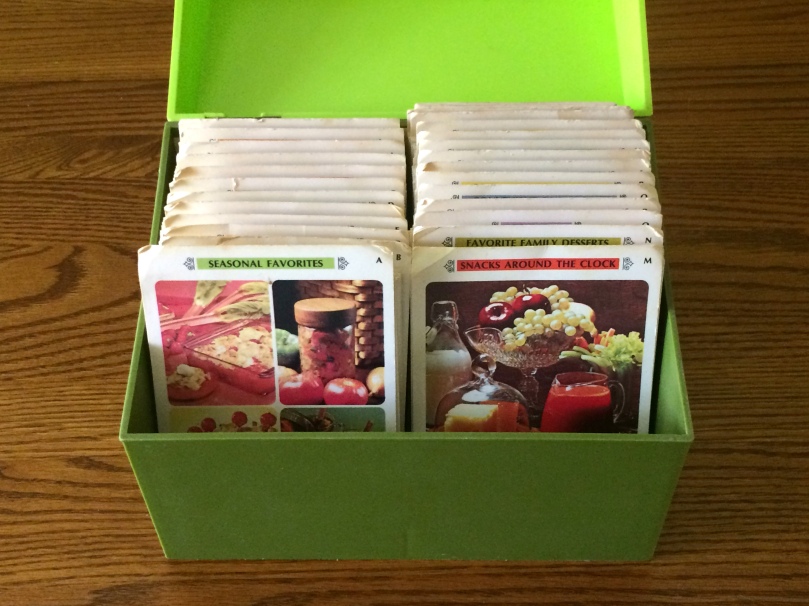 The recipe card collection could be acquired through a subscription arrangement, where you paid in installments and received a new set of cards every couple of weeks for a few dollars each time. In 1972, my newlywed mother subscribed. In the first shipment, she received her first set of cards and the (otherwise empty) plastic box in its trendy avocado green shade. Over the following months, she received the remaining 23 card sets with titles such as Family Breakfast Brighteners, Hurry-Up Main Dishes, Fondues, Recipes for Calorie-Counters and Entertaining on a Shoestring.

Visiting my parents this past month, I happened upon the familiar green box in the basement and opened it up to delve into the memories.

Living abroad as I do, and being regularly called upon to explain the cuisine of my country, or lack thereof, I found the American Classics set quite interesting. I know the traditional Midwestern dishes, of course, but sometimes forget what the iconic foods of other regions are. Also noteworthy is that in 1971, Hawaii and Alaska had been US states for only 12 years. It must have been rather a novelty for homemakers of the day to make recipes paying tribute to them, if not necessarily originating in the states. 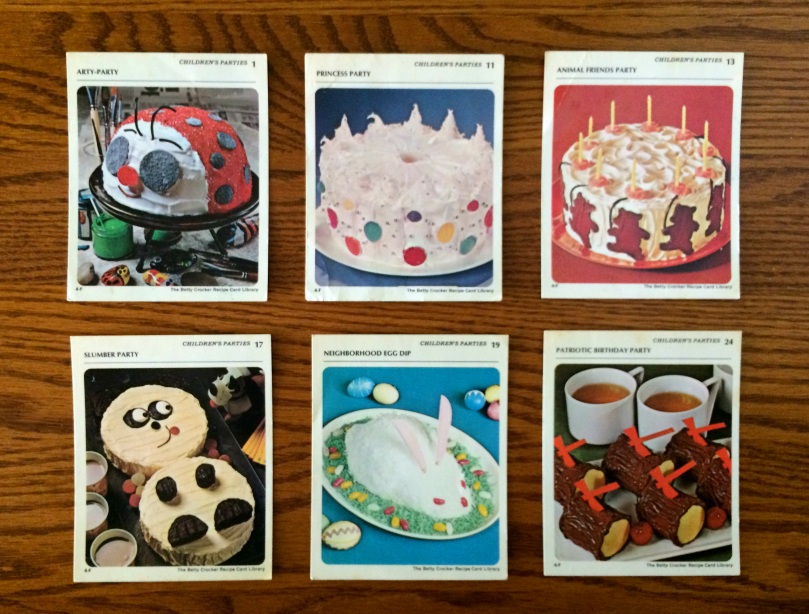 My favorite set is Children’s Parties. My mom made the top three cakes for our birthdays on various years, and the first two of the bottom row on other occasions. She never made the Lincoln-inspired Patriotic Birthday Party cakes as far as she can remember, but it would be a cute thing to make for a lumberjack-themed party, if you’re ever invited to one of those.

Men’s Favorites is a set that you (hopefully) won’t find in a recipe card set today, but in the world of the 1970s it was perfectly normal. As the introduction to the set goes, “When a man’s fancy turns to thoughts of his favorite foods, chances are good that you’ll find the right recipe in this collection. . . . They’re all here—princely recipes for kingly dishes, tested and male-approved for you.” There was clearly always the chance of losing your man if you were hopeless in the kitchen. Fortunately, Betty Crocker had your back with her Man-Pleasing Appetizers (mugs of beef broth and chicken livers wrapped in bacon). As you might expect, the set is full of meat-based dishes (but then, so is the entire library, so I’m not sure what the difference really is), but confusingly there are also some suspiciously fussy items like the minted fruit cups in the third recipe and tomatoes and lettuce on a plate (not shown).

As we looked through the cards together, my mom commented that for most of the recipes, a pre-made mix of some kind was a main ingredient, forcing you to buy Bisquick or a can of frosting rather than telling you how to make it from scratch. This may be due in part to the limited available space—the entire recipe always had to fit on one side of a 5 x 4 in. (10 x 13 cm) card—but we also suspect some collusion with the manufacturers of the mixes. But that was how cooking had been since the 1950s, she said, when convenience took priority over healthfulness. I also heard her say “gross” while looking at the ingredients for the breakfast recipe Pork-Potato-Apple Bake (corn syrup, crunchy peanut butter, boiled crab apples and Spam, anyone?). But she got a good chuckle from seeing the cards again and reminiscing. 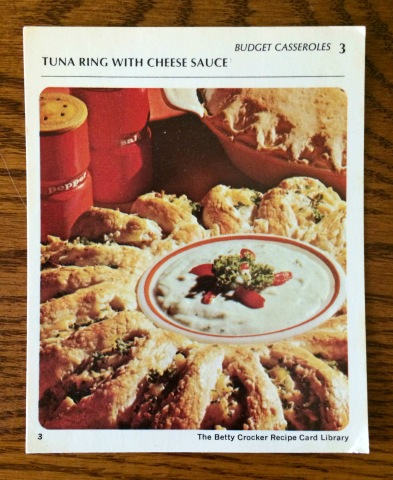 But let me finally get to the point of this post. As I was looking through the cards, I thought it might be fun to revisit one of the recipes for you. Choosing one was hard, but I finally settled on Tuna Ring with Cheese Sauce, with its entertaining impress-your-guests ring shape and ramekin of cheese sauce, from the Budget Casseroles set. In my first attempt, I experimented with a chickpea-based mock tuna salad that proved too starchy and heavy in combination with the thick biscuit crust. In search of a lighter, moister filling, I then tried a spinach-artichoke mixture that turned out to be very yummy with the crust and cheese sauce. I’m very happy with how it turned out. It was also a chance to share an activity with my mom, who helped me with the process of rolling the dough into a log and forming a ring, modeling the motions so I could take more action-oriented explanatory photos for a change.

I’m not sure how specifically 1970s this recipe is, since (as my mom informed me), people have been making sweet “tea ring” cakes with the same cutting-and-turning technique since forever, but something about this dish just spoke to me. And as it’s inspired by the Betty Crocker Recipe Card Library, I feel justified in tacking the word “retro” onto the title.

So roll up your sleeves, take a moment to feel gratitude for pocket calculators, soft contact lenses and NPR, and let’s get started!

If you’re pressed for time, you may want to start the cashews boiling for the mozzarella-style cashew cheese recipe (see below) before you begin making this spinach-artichoke mixture. 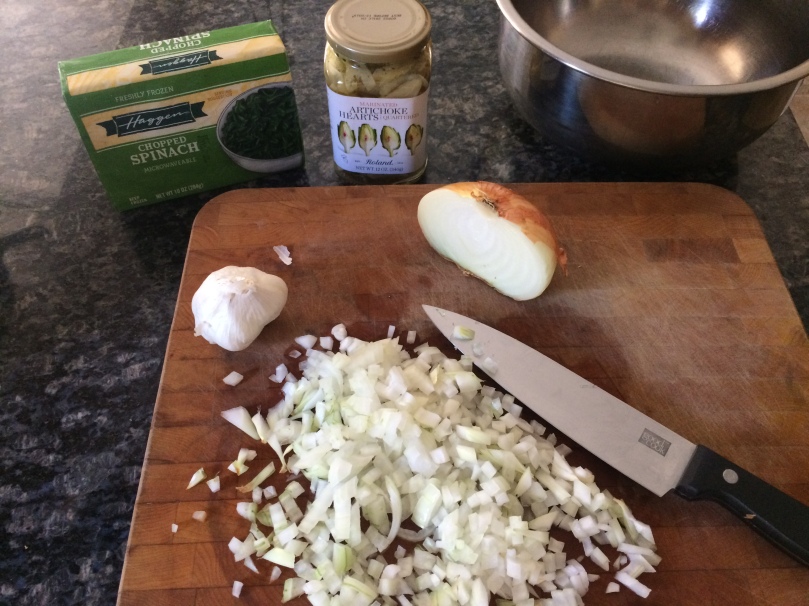 Dice the onion, mince the garlic and roughly chop the artichoke hearts, then place in a medium mixing bowl. 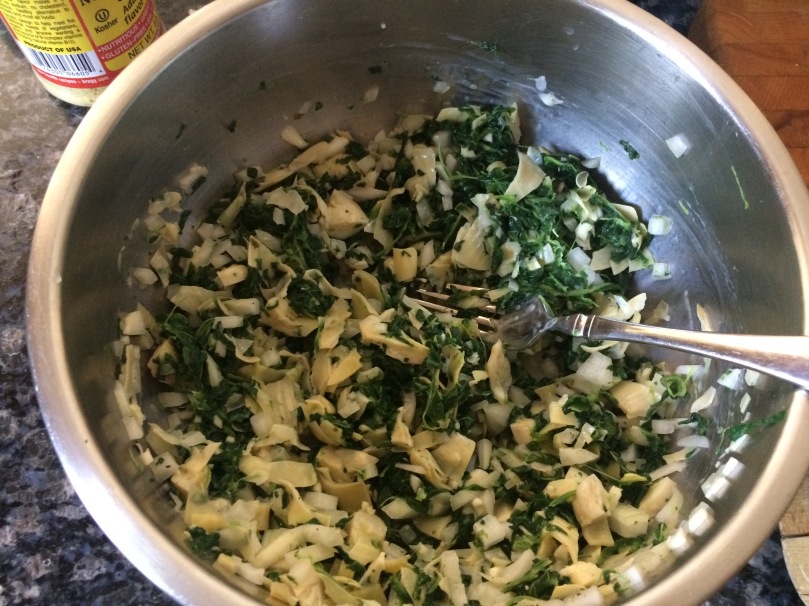 Defrost the spinach a bit and squeeze to remove most of the moisture. “Fluff” it and place it in your measuring cup to ensure you have the right amount, then add to the mixing bowl. Add the non-dairy milk, salt and white pepper and stir to combine. Set aside and make the mozzarella cheese, which will be added to this mixture in the same bowl.

Place the raw cashews in a small saucepan and fill with enough water to cover the cashews. Bring to a boil, then reduce heat and simmer for about 15 minutes until the cashews are soft.

Drain the cashews, place in a food processor or high-power blender along with the cup of water and process until smooth. Add the remaining ingredients and process again until everything is fully incorporated.

Transfer the mixture to a medium saucepan and heat on medium-high, stirring constantly. After just a minute or two, clumps will begin to form, and then after a minute more it will become stretchy, gooey cheese.

Remove from heat and incorporate into the spinach-artichoke mixture. Set aside while you make the biscuit dough; if you end up making the mozzarella last for some reason, ensure that the mixture is somewhat cool before you spread it on the dough.

Begin by mixing the soy milk with the apple cider vinegar in a small bowl. Set aside; mixture will thicken.

Combine all the dry ingredients in a medium-sized mixing bowl. Then, with a pastry cutter or fork, work the margarine into the flour just until you have a crumbly texture. Be careful not to handle it too much as this can make the dough tough. 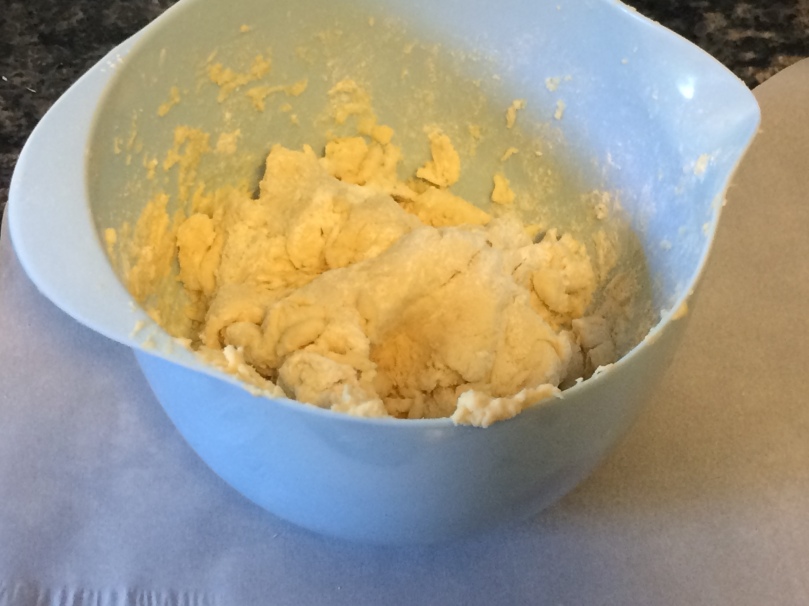 Add the soy milk and stir a bit to incorporate. Knead with your hands briefly until you have a somewhat sticky dough. Again, avoid overmixing. 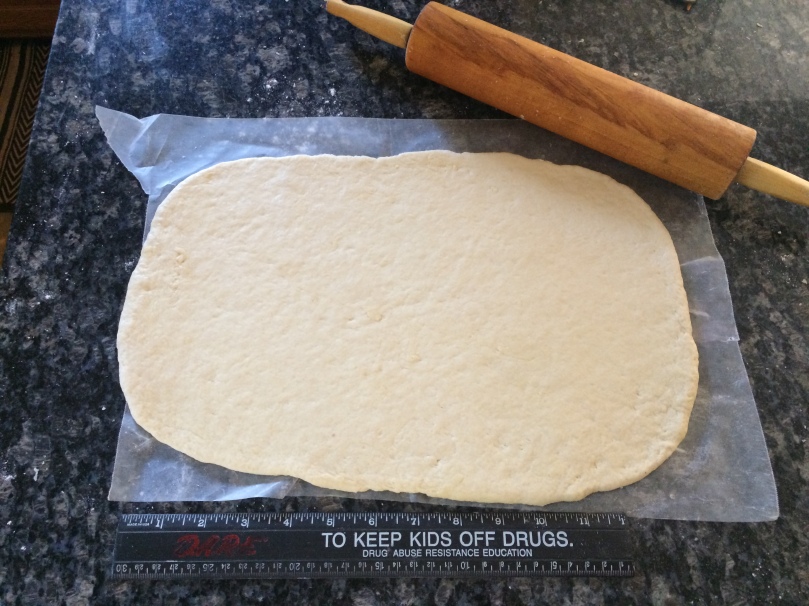 Place a large sheet of baking paper or waxed paper on your countertop and sprinkle it with a bit of flour. Put the dough in the center of the paper and gently roll it out using a rolling pin until you have an approximately 15 x 10 inch (38 x 25 cm) rectangle. Since I was making this at my parents’ house, I got to measure mine using a Reagan-era D.A.R.E ruler that one of us kids had gotten at school. 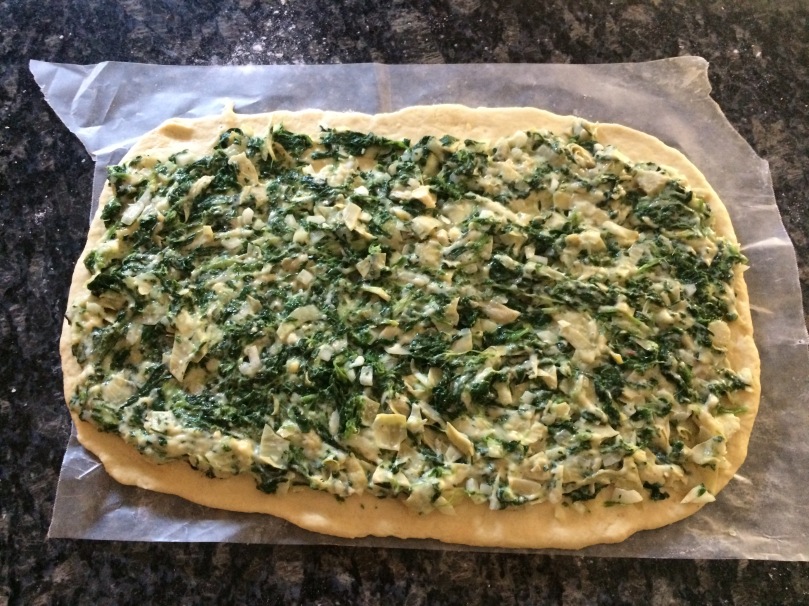 Spread the dough evenly with the spinach-artichoke mixture, leaving a margin free around the edges. The longer edges should have a wider margin, and the short ends a smaller margin. 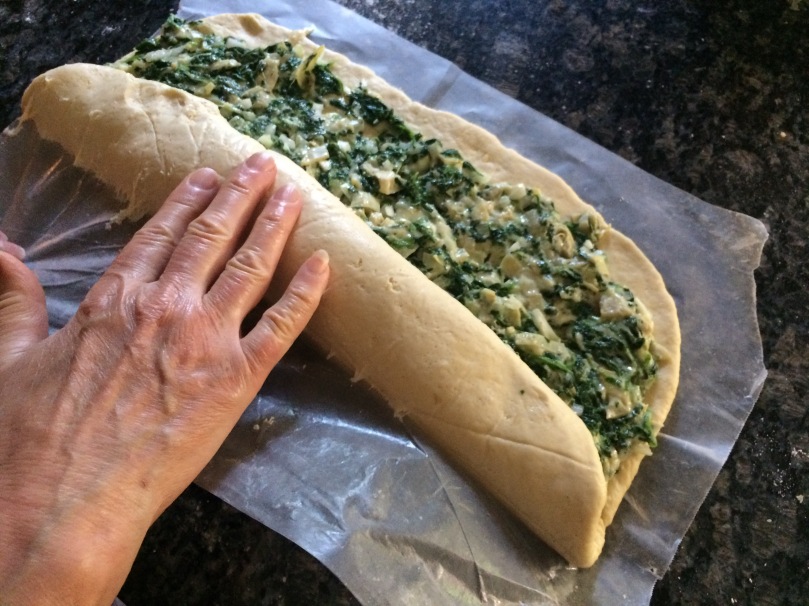 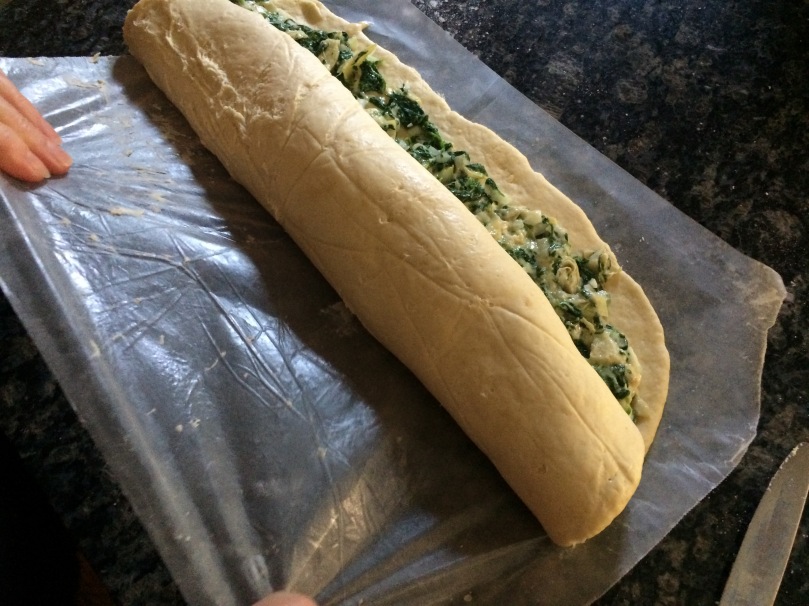 Starting at one of the longer sides, roll the dough in one direction to make a log (do not roll the paper up with it). If using waxed paper, transfer to baking paper or, if you don’t have baking paper, directly to a greased baking sheet or pizza pan.

Press along the long edge to seal the log, and bring the ends together to form a ring. Try to keep the center hole large enough to hold the ramekin you’re planning to serve the cheese sauce from.

Transfer the baking paper with the log on it to your baking sheet (I forgot to do this until the next step) and press the ends together to seal the ring, trying not to pinch it too much and make it too narrow. Don’t stress too much if the dough stretches and breaks in some places; it will be less obvious once the ring has baked.

With clean kitchen scissors, make cuts two-thirds of the way straight through the log at one-inch (three-centimeter) intervals all the way around the ring.

Now, lifting each part of the log from both sides, gently turn each cut section slightly so that it rests partly on its side and the filling is partly exposed. 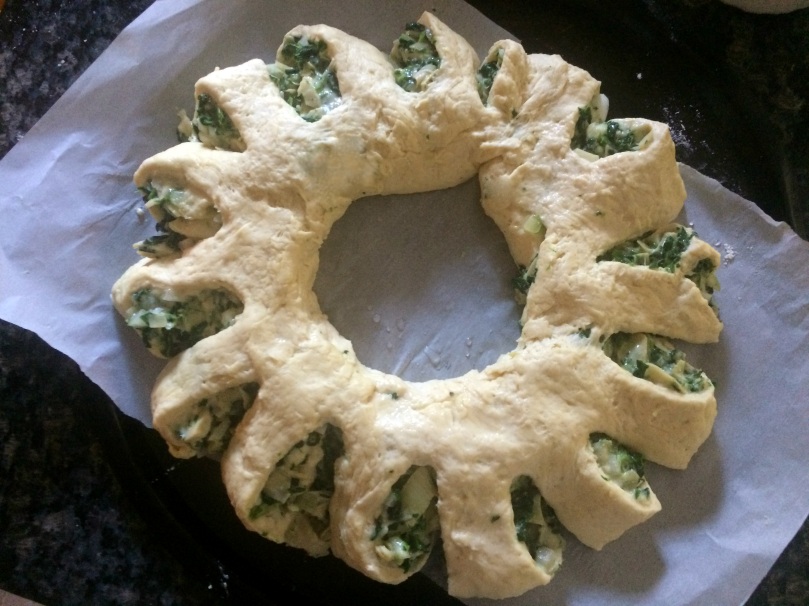 Heat the margarine over medium-low heat in a saucepan until it melts. Add the flour and whisk; it will form what is called a roux. Add the soy milk mixture and whisk thoroughly to prevent any clumps from forming. Add the nutritional yeast and white pepper, combine thoroughly, and taste to see if you want to make it saltier (add a splash more of soy sauce or a pinch of salt).

When the ring is done baking and the cheese sauce is ready, place a ramekin or small bowl in the center of the ring and fill with sauce. To serve, place a spoonful of sauce on each plate and top with a slice of the spinach-artichoke ring. 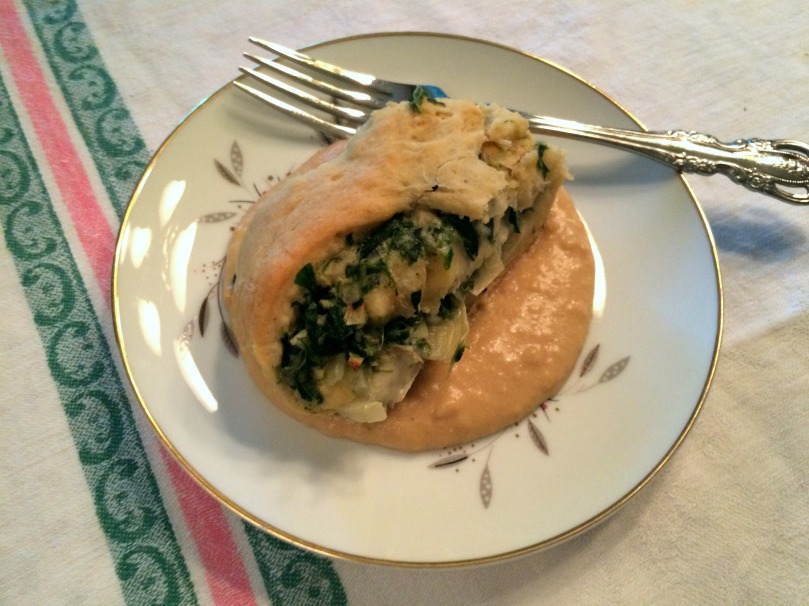 Variations: Rather than making a log formed into a ring, cut the dough into four squares, divide the filling among them and fold each one over to make savory turnovers. Cut slits on the top for the air to escape, and bake for 20-25 minutes.

Ideas for other 1970s dishes you could serve with this can be found here.

After dinner, relax with a Grasshopper and an episode of Mary Tyler Moore, The Partridge Family or The Odd Couple.

And if, after reading this post, you want some vintage Betty Crocker recipe cards of your own, check eBay, where several sets are for sale. Alternatively, someone has scanned the fronts and backs of all the cards and generously shared them with the world here.

For more fun, be sure to check out this collection of 1974 Weight Watcher recipe cards (don’t miss the commentary in the captions!). 🙂

If you make this dish, please comment and let us know how it was!